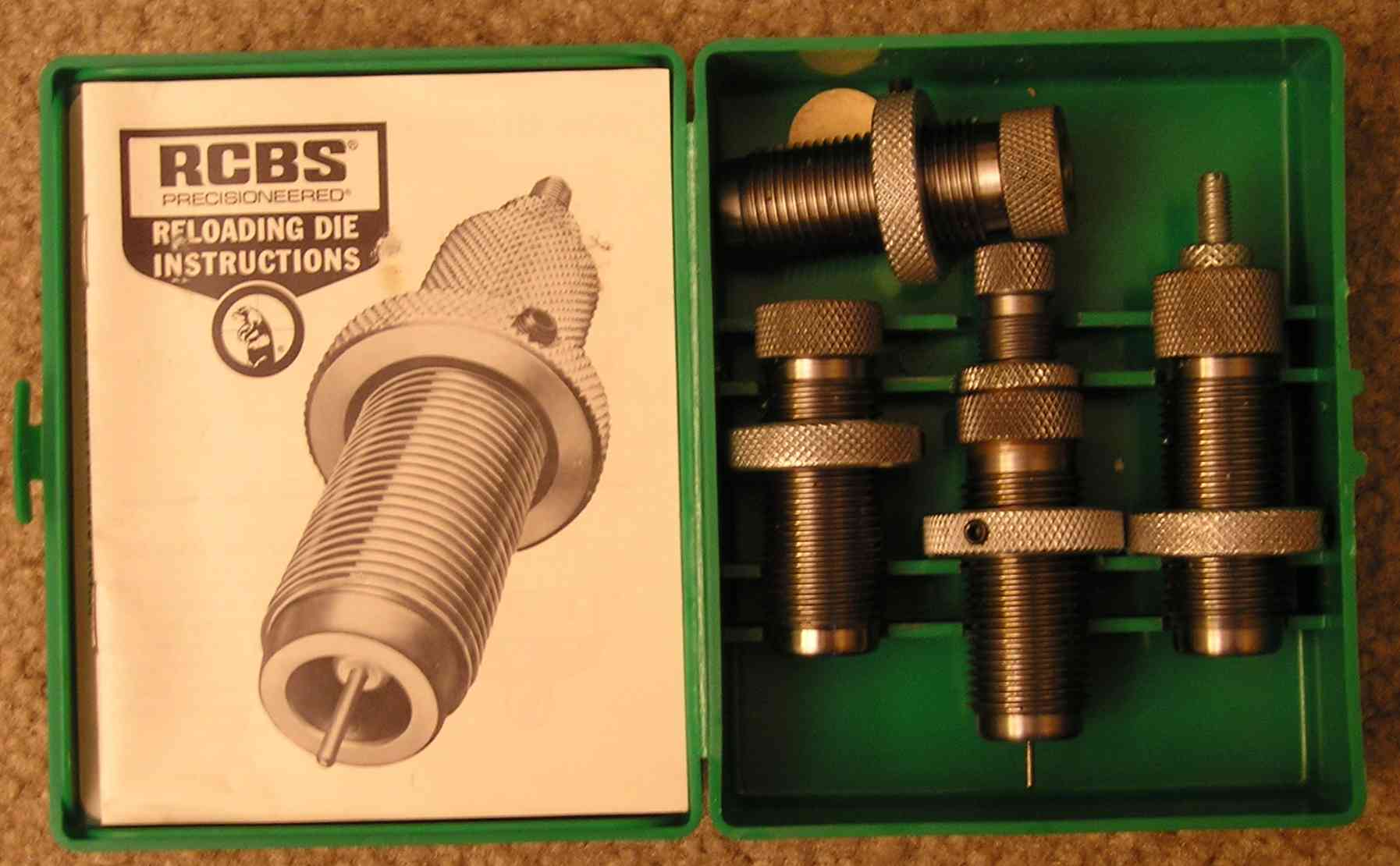 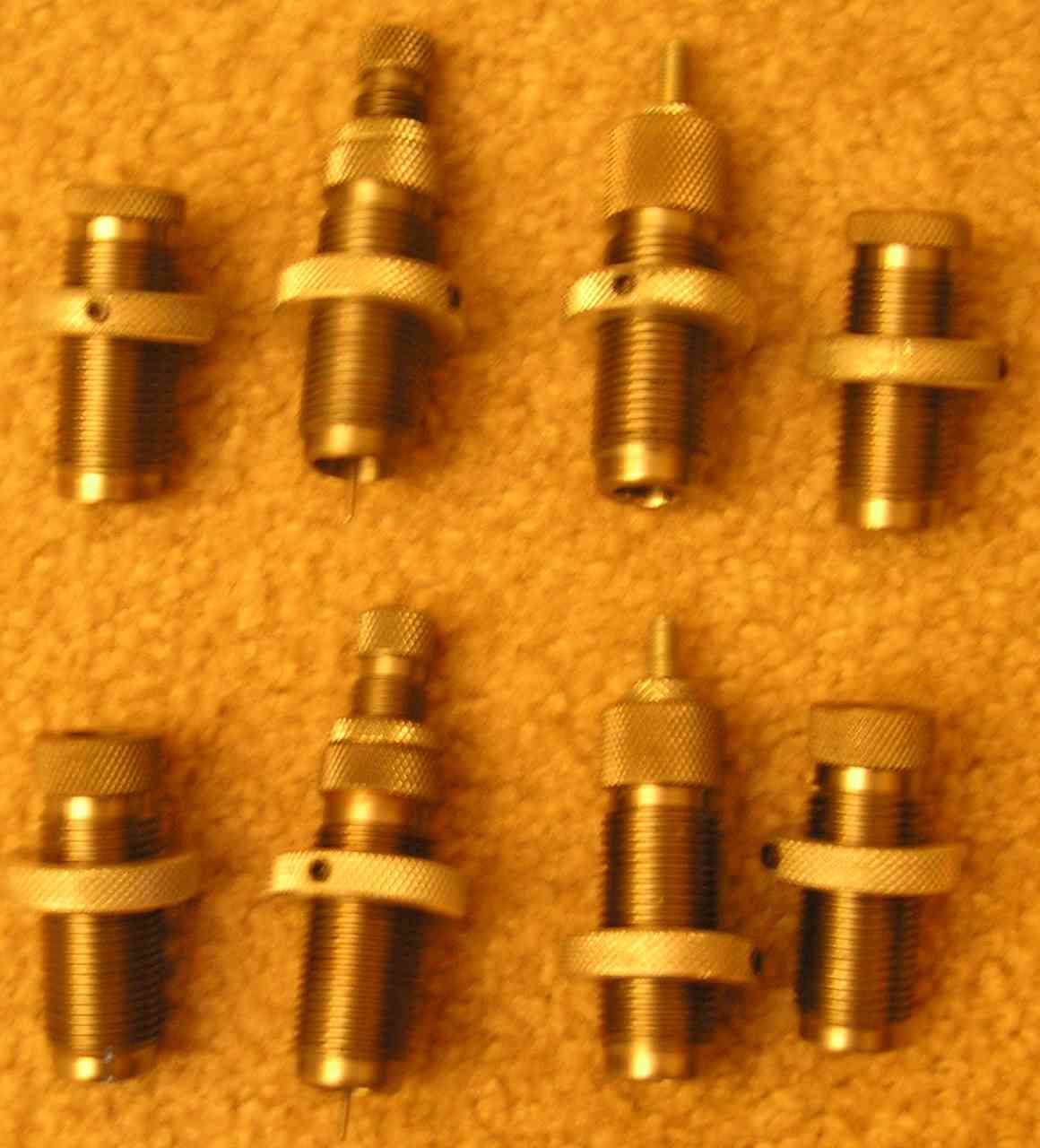 This is a
comparision of a 1972 RCBS set to a 1975/76 RCBS set.  Note the different
knurling height on the die sets (no effect on functionality).  The dies are
pictured from L to R:  Size, Expand/Decap, Seat, Crimp. 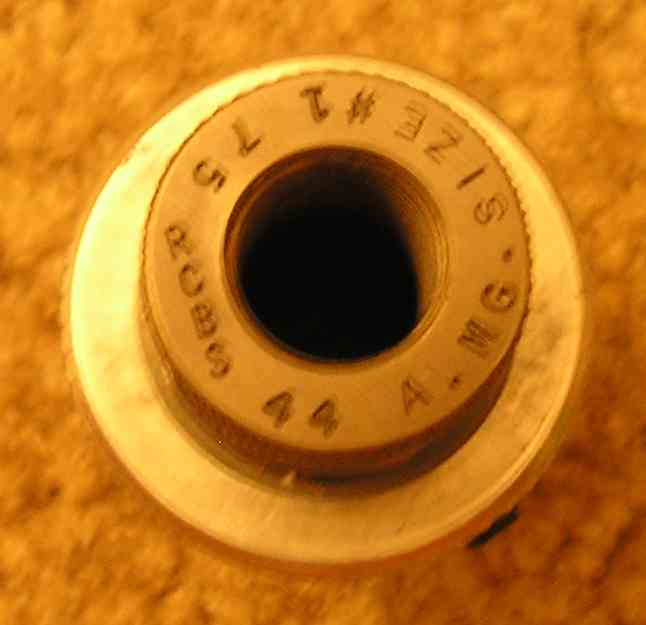 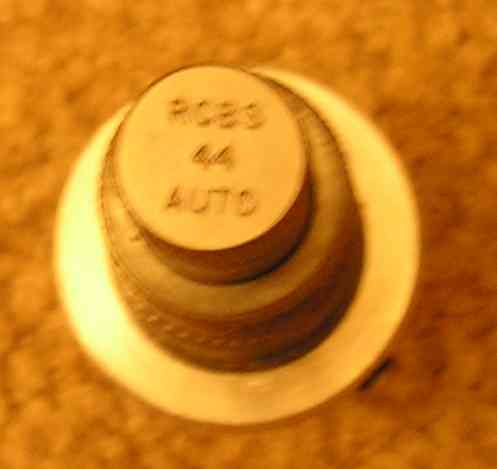 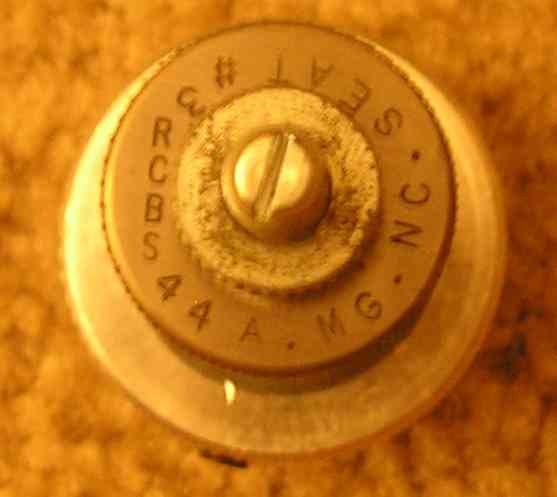 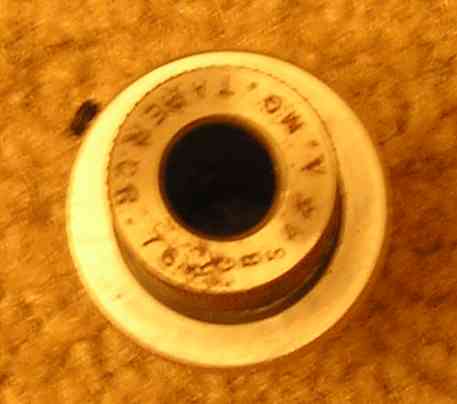 Pictured above is the markings on the top of
each die.  Early dies have the date stamped on them like “75”, seen
here.  The Expander doesn’t have a date.  Later, RCBS went to a
“Letter” system to date dies (A, B, C, etc. each represent a year).

Notice the expander
on the left with integrated decapper, the decapping pin is held by a collet
machined into the end of the expander assembly.  The decapping pin on this
era die is “straight”, no “head”.  RCBS changed to a headed pin sometime in
the 1990’s. 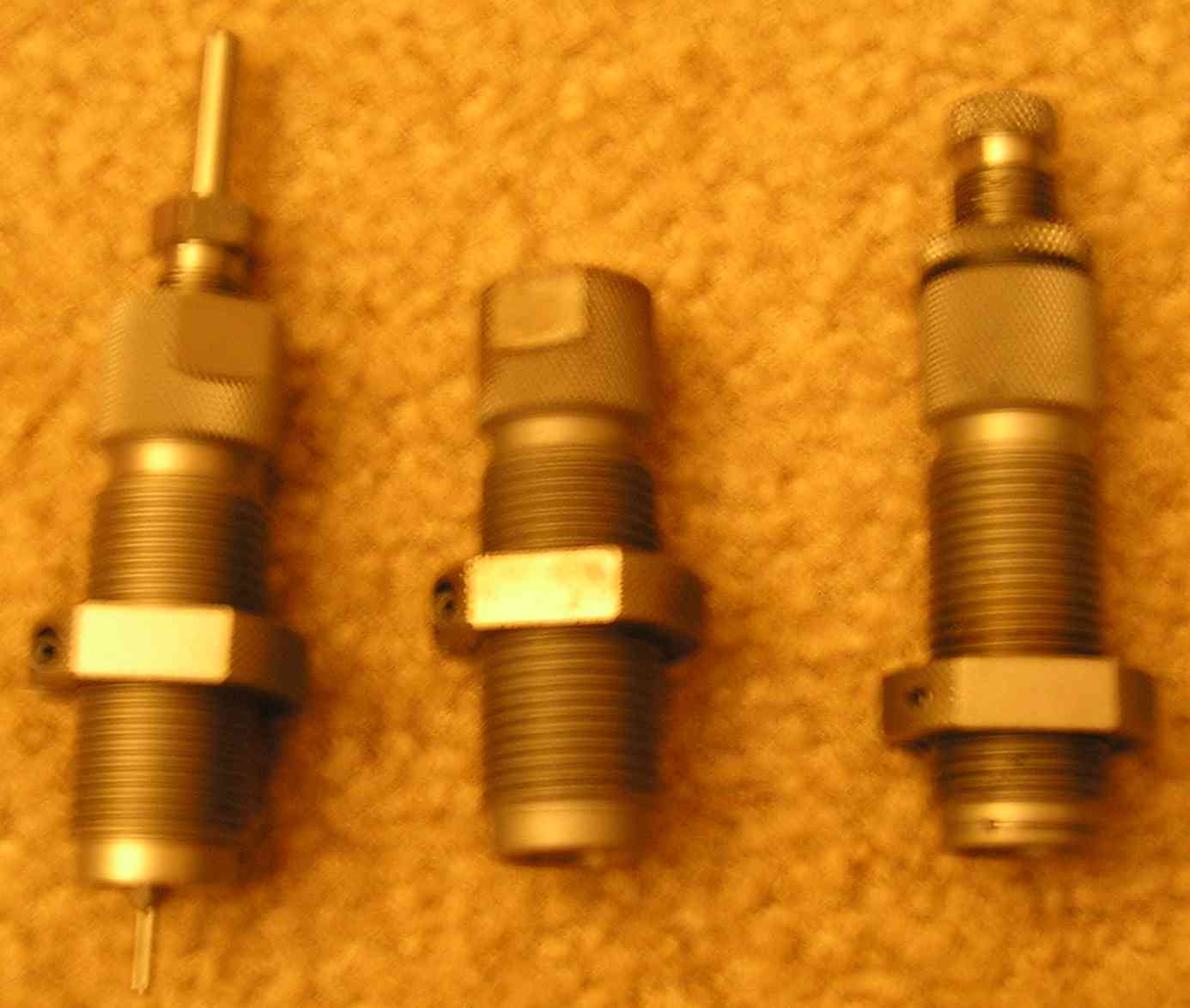 Detailed
picture of Hornady Die Set.  Hornady uses a floating decapper in the size
die, the expander is fixed and cannot be unscrewed.  The seater is a
floating unit that guides the bullet nose all the way up, and then seats and
crimps.  Currently the best bargain for the new Automag owner having
difficulty locating an original set. 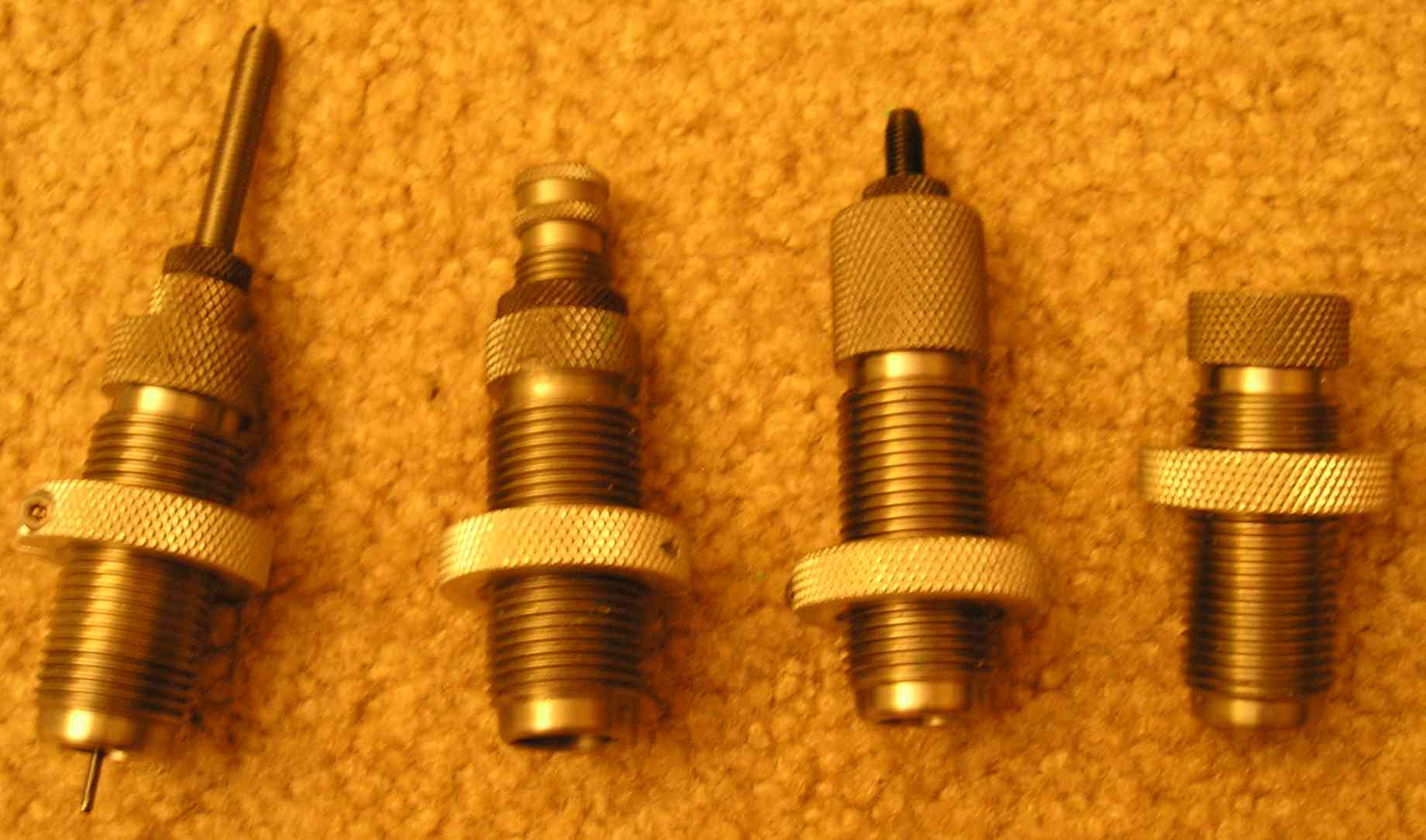 Pictured
above is a RCBS 4 die set for the 45 Winchester Magnum.  I thought it was
worth mentioning as a few hundred were chambered for this cartridge in the
1980’s.  Notice the “55000” part number from RCBS, this is used to denote a
Custom Die Set.  The dies are as follows:  size/decap, expander,
seater, and crimper.  They are simliar to the 44 AMP 4 die set.  This
set happens to have “split” aluminum lock rings, the best type, as they cinch
down around the dies, instead of using the brass screw into the threads. 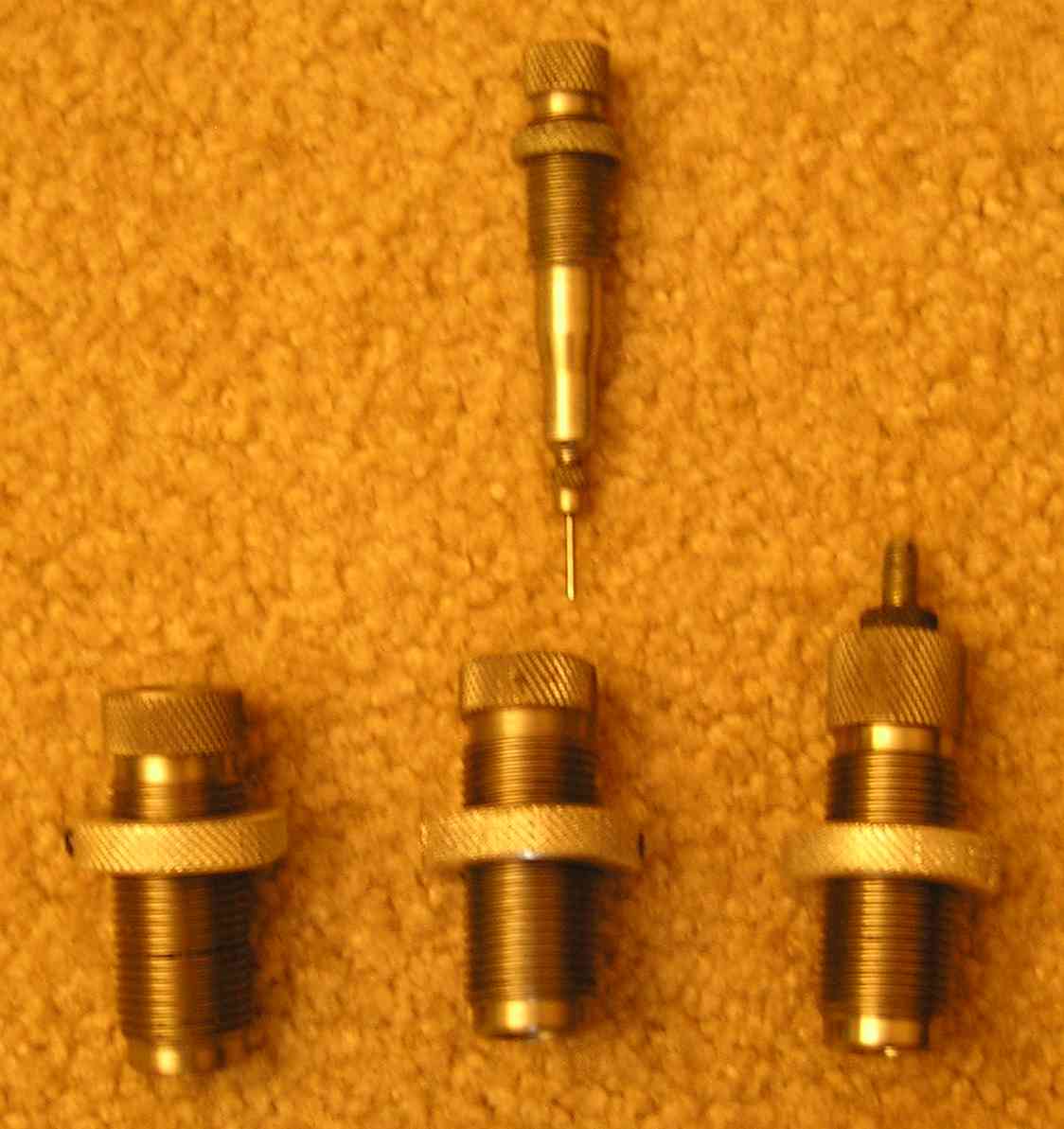 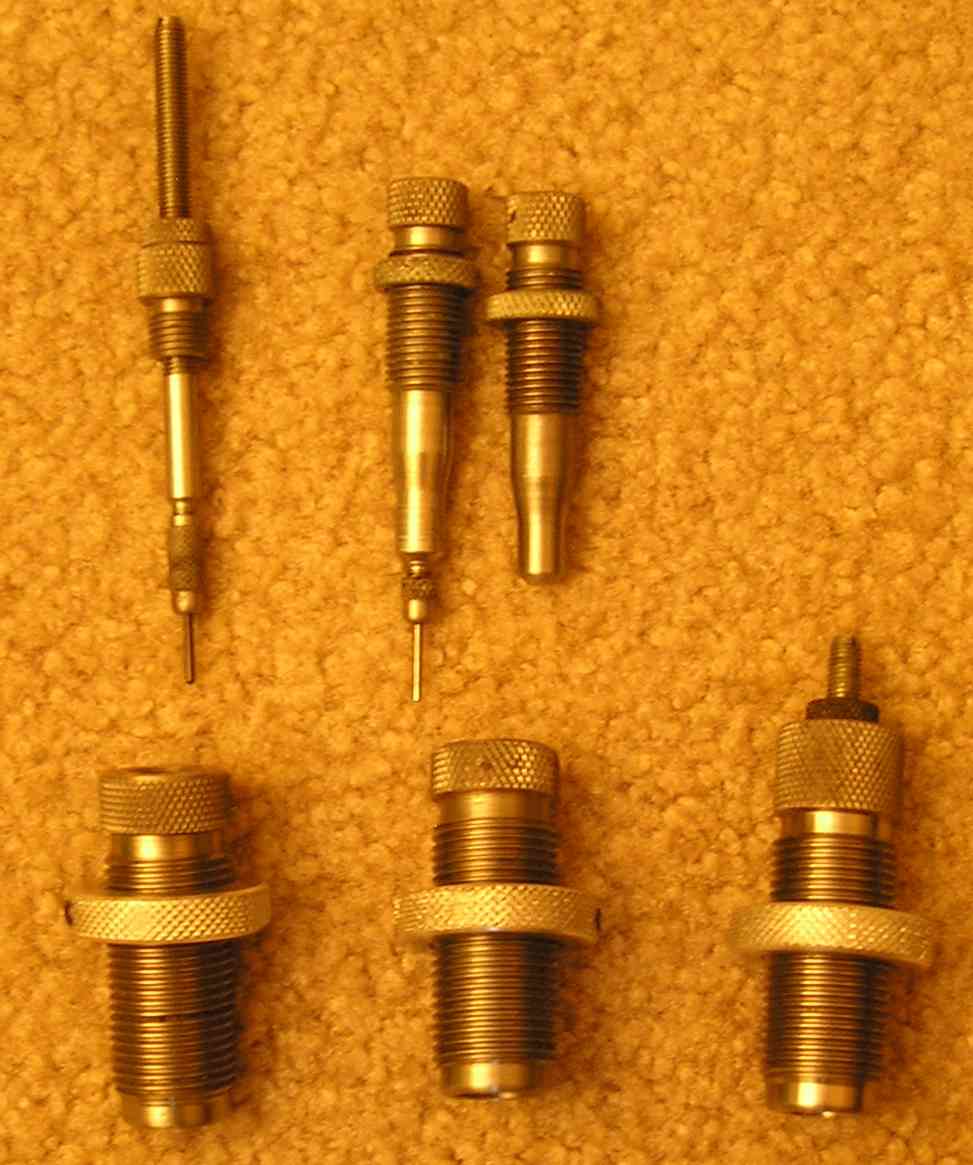 To expand
on the above, this shows some variation.  Notice the Decap assembly
available for the size die.  This came about in the late 1970’s, early
1980’s for RCBS.  This allowed use in progressive reloading machines such
as the Dillon which require decapping in the sizing stage.  Notice the two
expanders-  The first is the traditional expand/decap assembly, the second
is only and expander.  Is is common to find the collet damaged/broken on
this era die sets, rendering it useless for decapping.  One option is to
purchase the decapper unit for the size die, and cut off the expander decap
collet and make the die only an expander.  Also, note that any 357 Magnum
Expander will work, and used die sets of 357 Magnum can be readily purchased to
acquire an original expander/decapper. 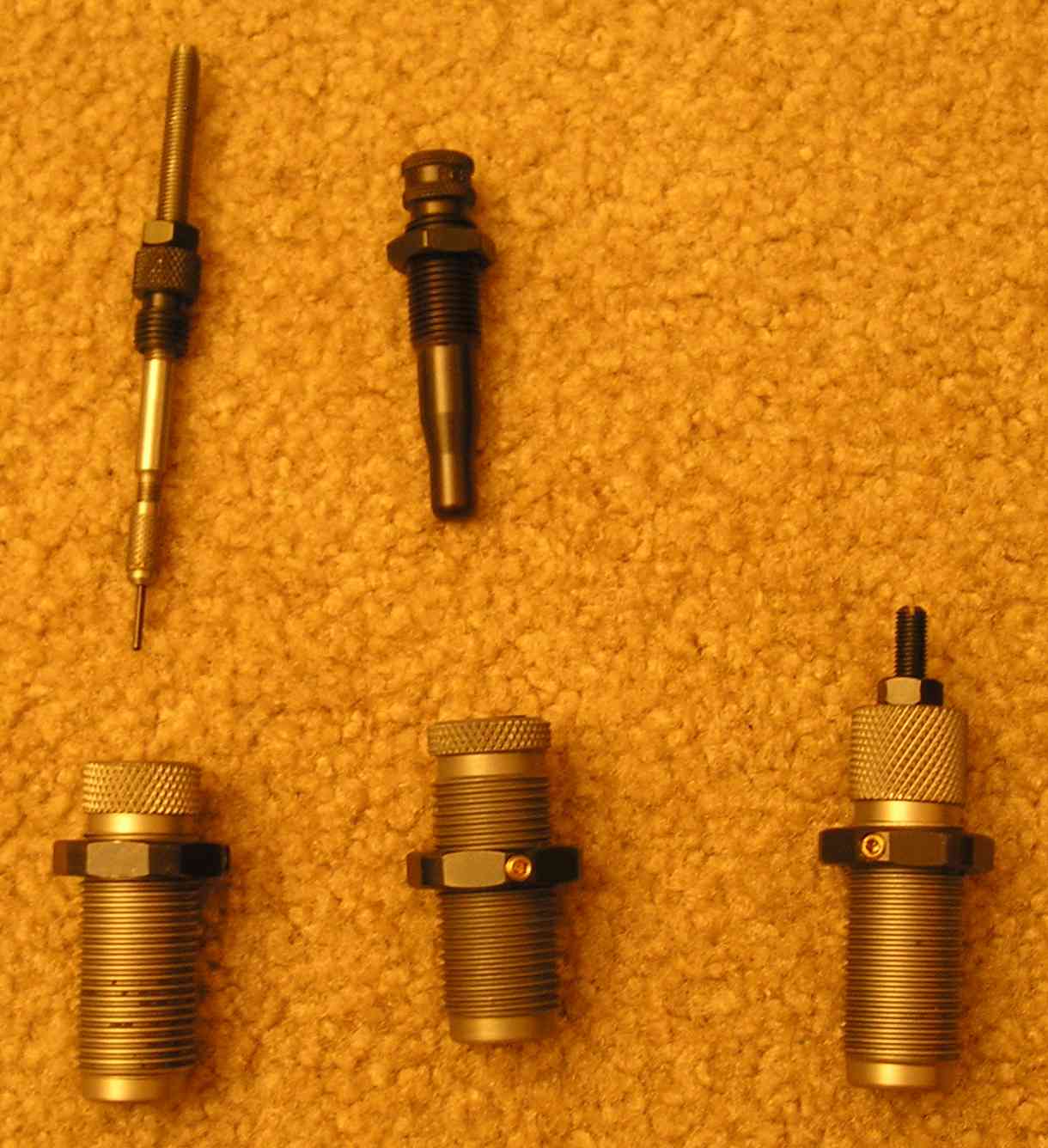 This
is a 1990’s 357 AMP dies set, RCBS Part # 56424 (notice the different part
number).  Notice the decap assembly is in size die.  The expander does
not have the decapper.  Notice the hexagon lock nuts with brass set
screws.  The lock nuts are small enough to use on tightly crowded
progressive machines (The older larger knurled lock nuts are too close for many
machines).  RCBS recommends placing a lead shot under the brass set screw
to avoid damage.  Black oxide coating on certain parts. 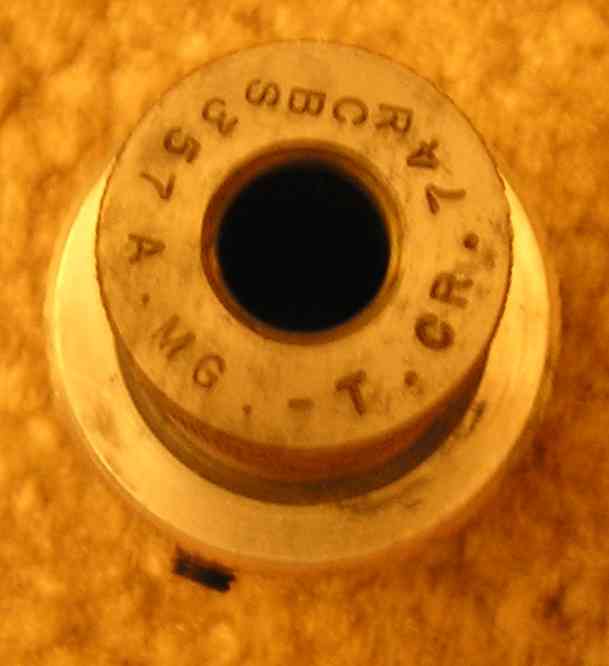 This is a 357
AMP Taper Crimp Die, RCBS Part # 55000 (custom die).  Lee Jurras advertised
these in his Newsletter’s.  The 357 AMP headspaces on the shoulder, so a
taper crimp so not be as critical, however, this die was offered in limited
quantity.  I have also heard of people using 150gr 35 caliber spitzer
bullets (loaded singly) for hunting, possibly using this die.

I don’t
have any info on other necked calibers, but die sets should basically be the
same as the 357 AMP. 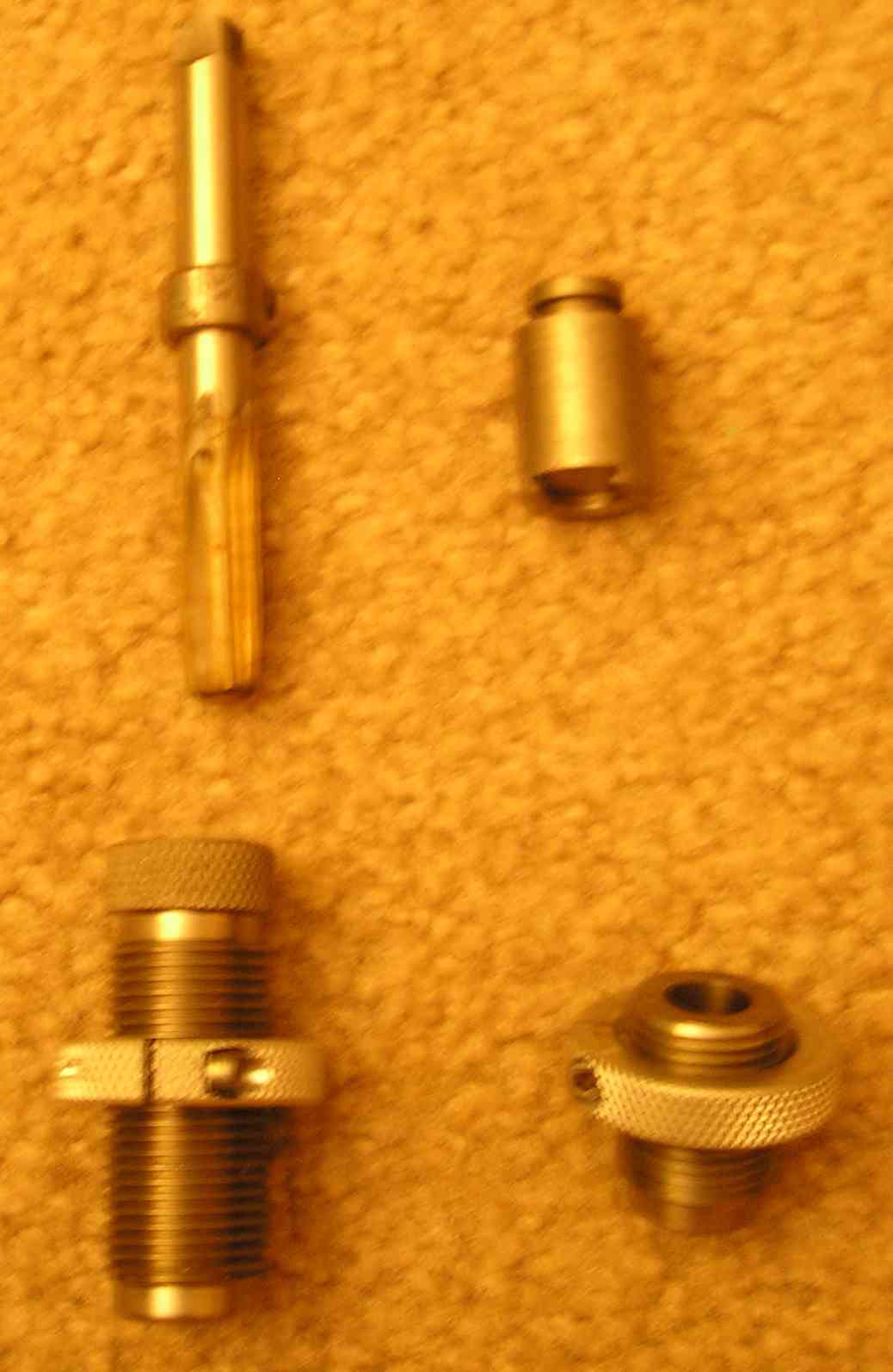 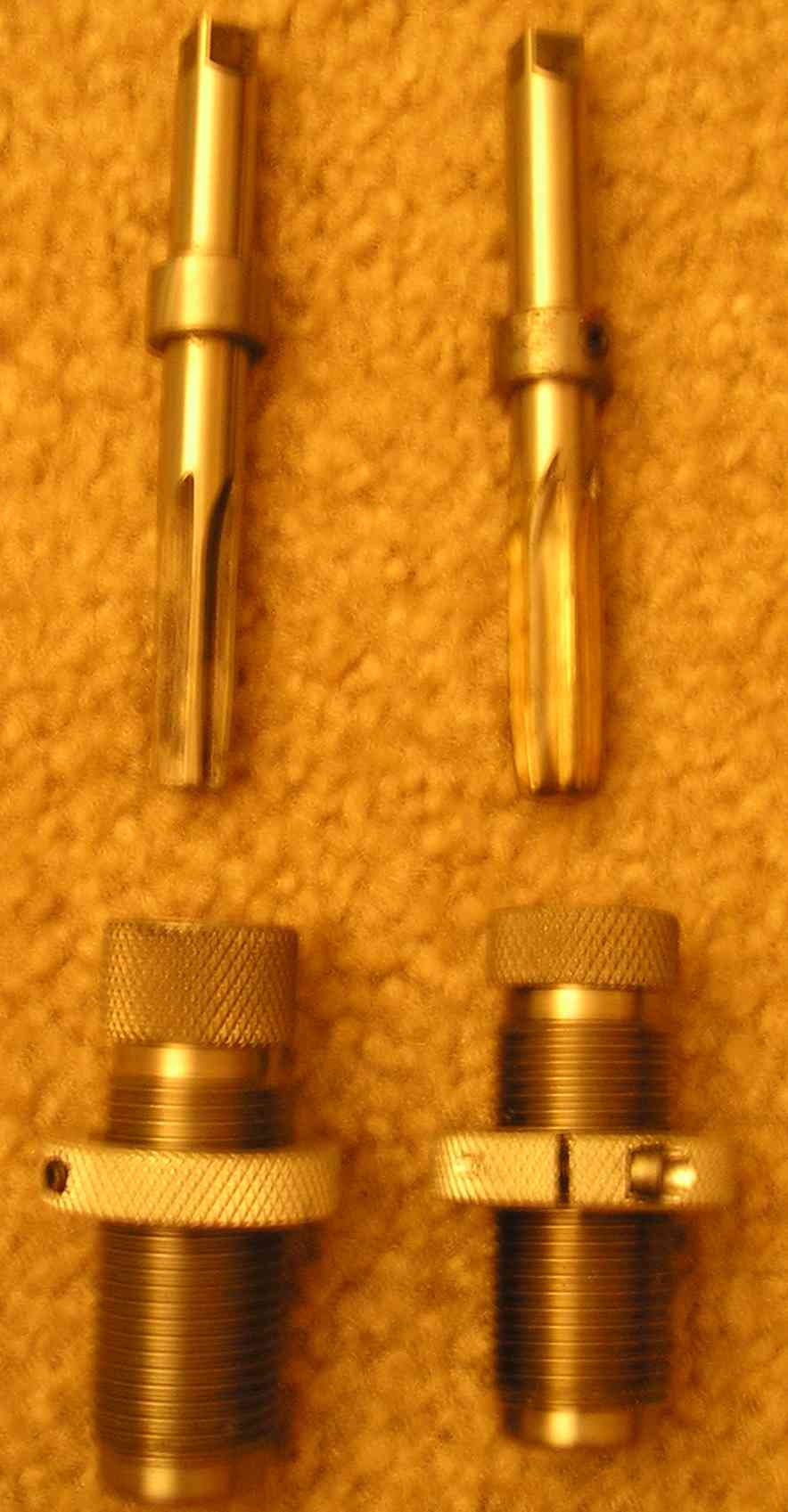 These
are both RCBS case forming dies (On left, #40039, On right # 55000).  I put
this picture to show the difference in manufacturing.  The reamer die on
the left is taller than the right. The reamers are the same length, but note the
stop collar on the left is higher than the one on the right.  RCBS preset
the stop collar from the factory and recommended it never be adjusted.
Also, this picture shows a good comparison of the die lock rings, set screw on
left (with lead shot underneath, unseen), and split lock ring on the right. 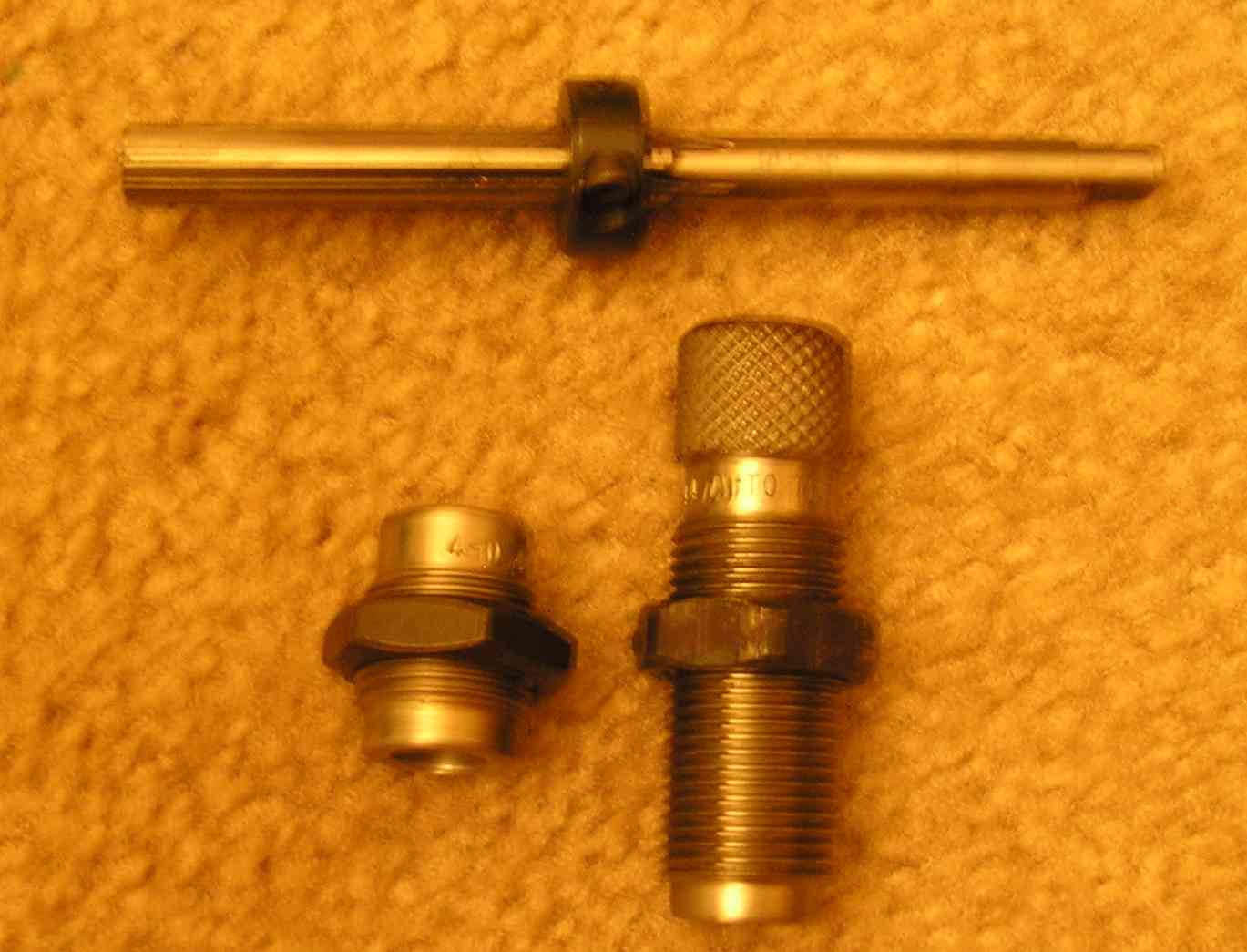 Case forming set from CH4D.  Reamer
does not come with stop.  CH4D provides custom dies at reasonable prices
for many obsolete/rare/wildcat calibers. 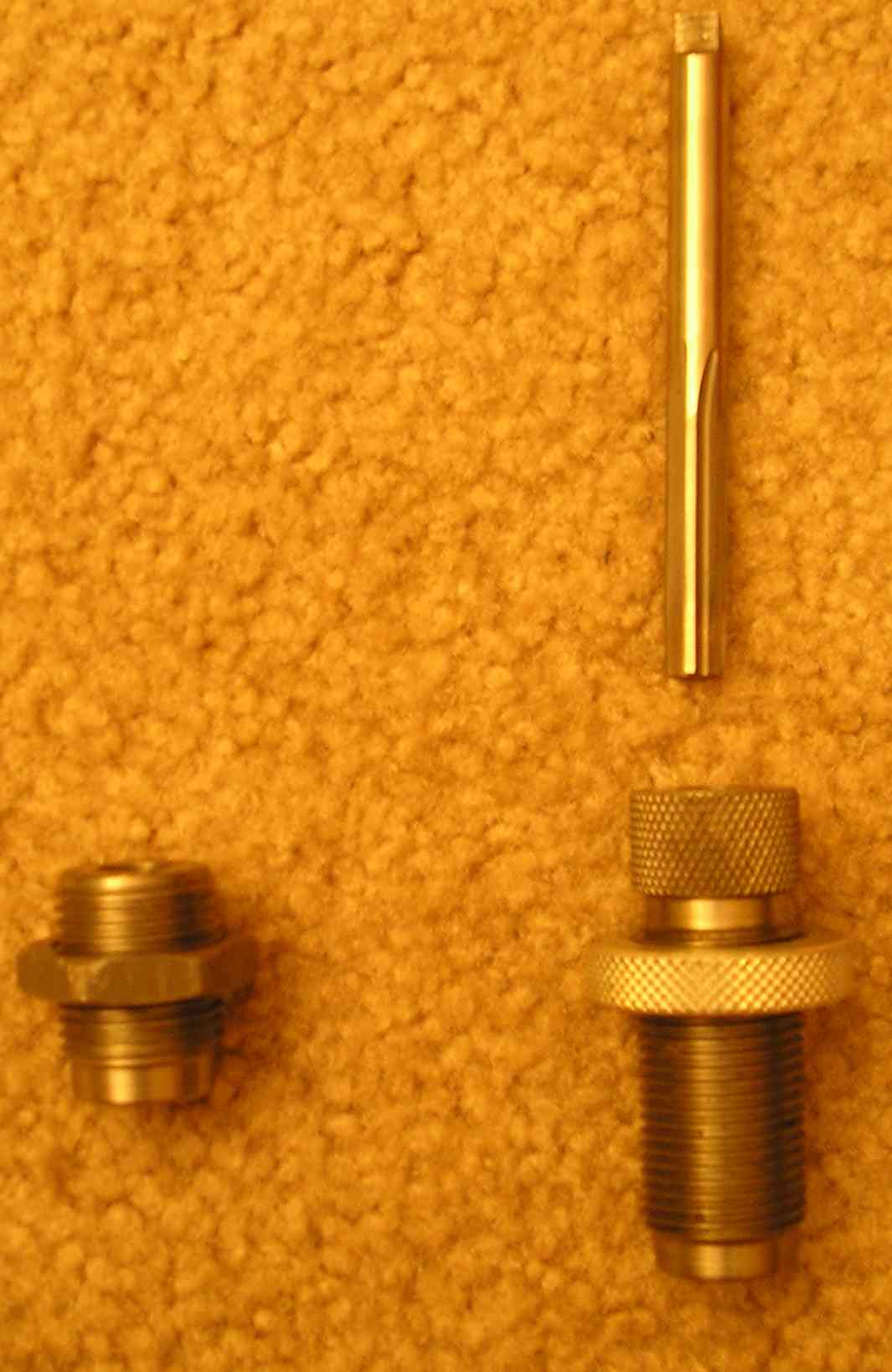 357
AMP Case forming set, RCBS Part # 40040 (sometimes # 55000 was used, shown
here).  On left,
form/trim
die,
on right reamer sie with reamer.  No extended shell holder, could be
missing or not ordered.  Note Reamer has no stop, as the case is necked
down before reaming and is reamed straight through.  With Starline 44 AMP
brass, one does not need this case form set, simply reform the brass in the 357
AMP sizing die.

The
357 AMP case form set was recommended to use with 308 Winchester Brass, and did
not include 30-06 Springfiled as an option.  I do not know why this is,
maybe someone else can shed some more light on this.


Note
on all reamer dies, all parts could be ordered seperately, and it is possible to
come across where someone has only a few pieces of the set. 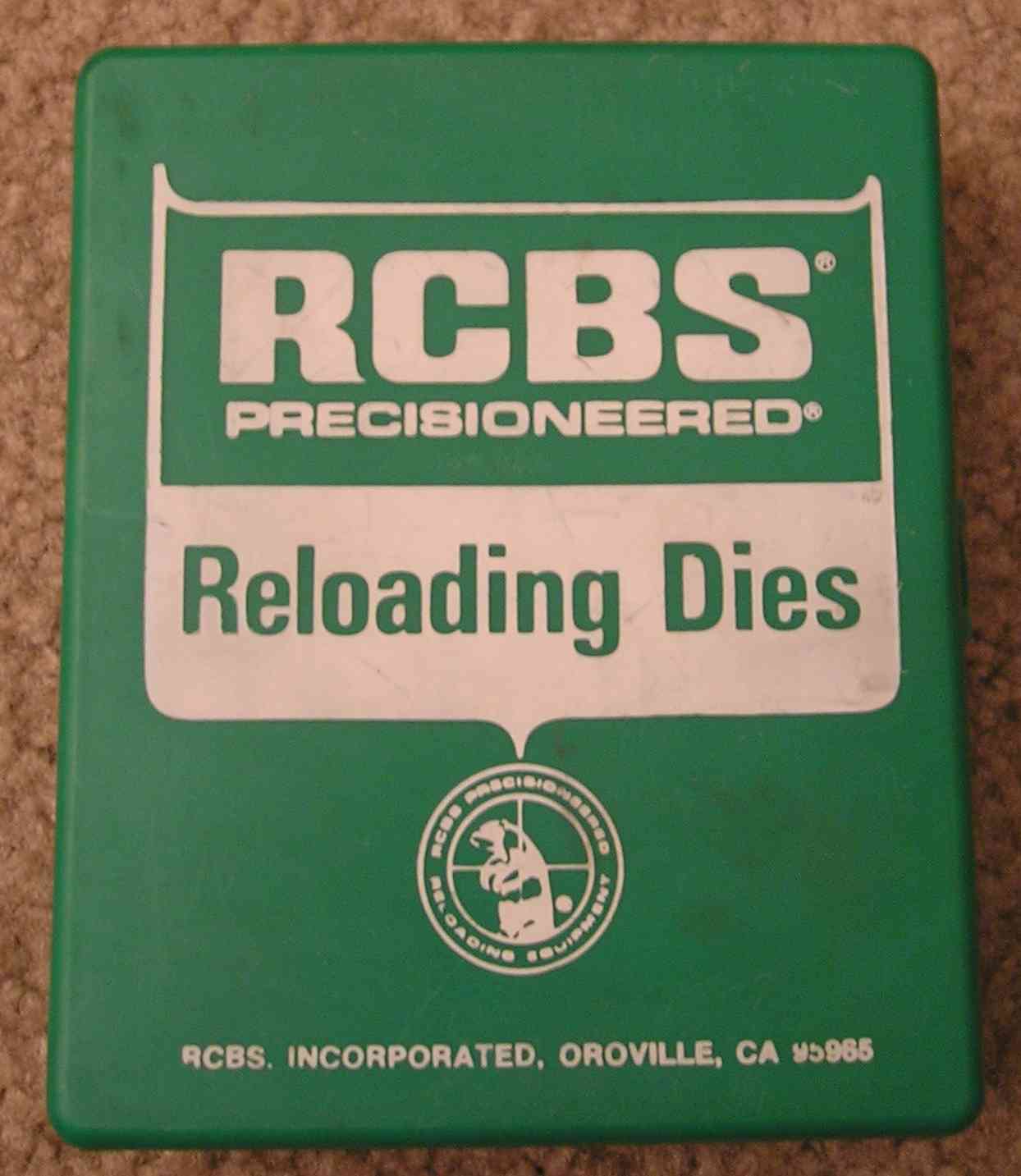 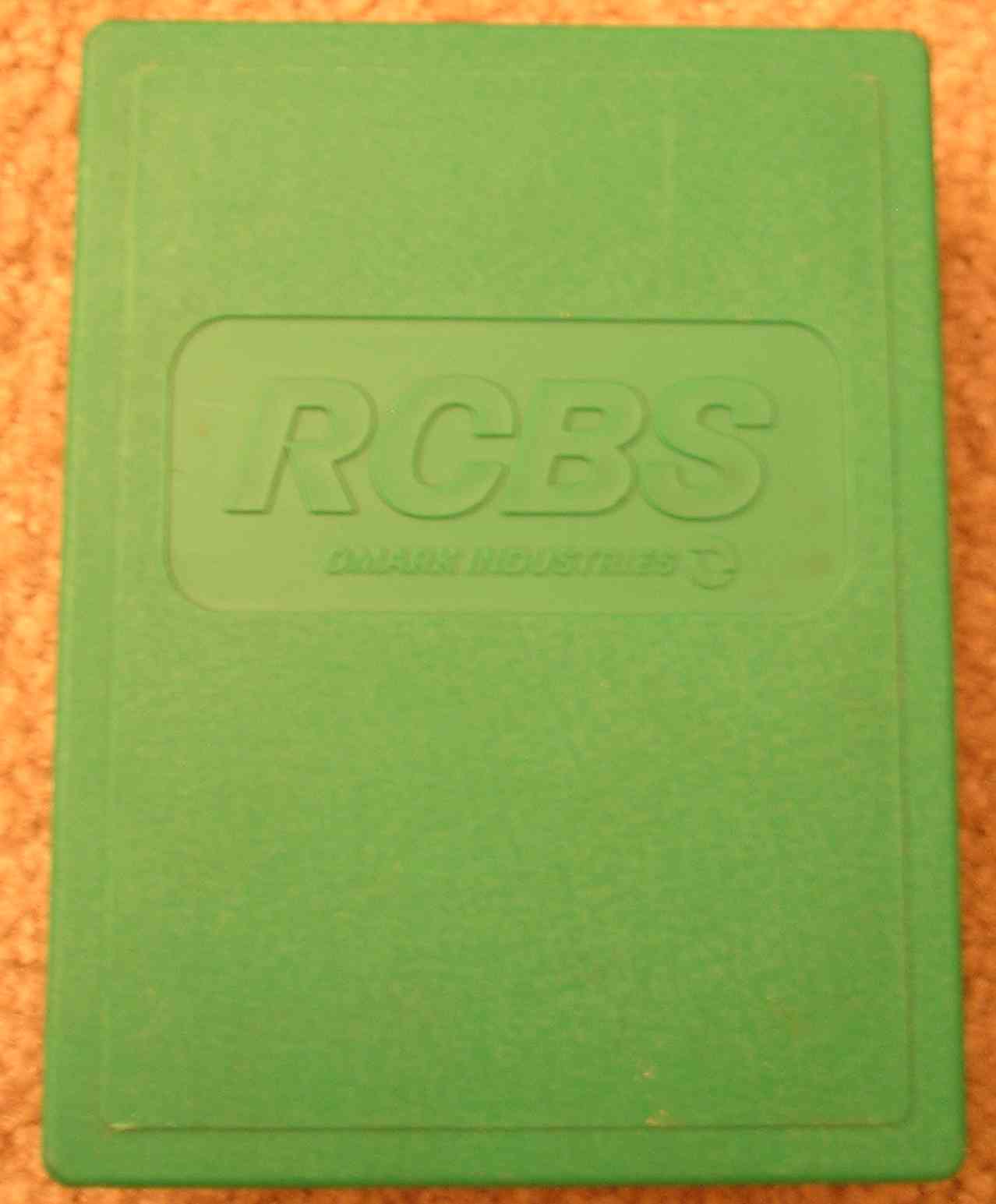 1980’s
to current RCBS Die Box, may not say “Omark”, depending on era.  Newer
carbide die boxes are grey.

Interesting Facts from the 1972
and 1976 RCBS Catalogs